Here’s another artistic/Design process article for you; showing how I created this illustration with pencil, paper and Photoshop. (See more of my illustrations at my portfolio: johniwhite.com) 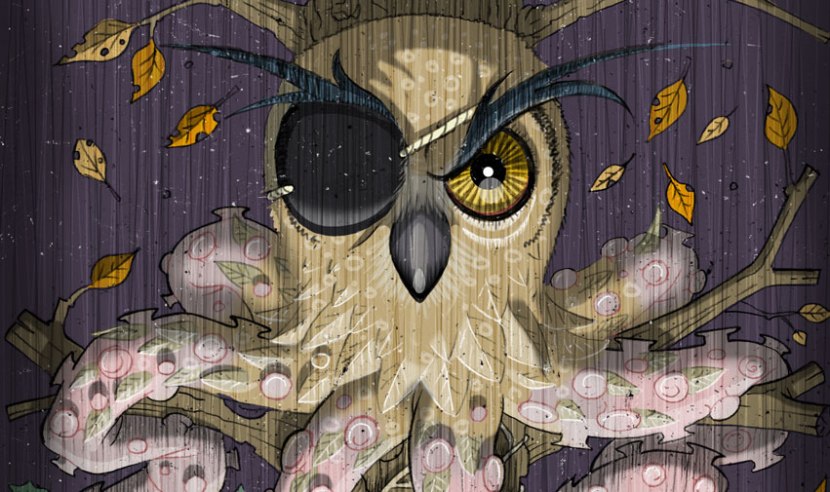 Where Did the Idea Come From?

I wanted to experiment with pencil drawing – and Photoshop. So: no inks and no graphics tablet for the drawing phase. But what to draw?

The subject idea probably popped into my mind after walking through Knocksink Wood, near Enniskerry, County Wicklow here in Ireland. There was lots of ivy all over the trees, and it reminded me of tentacles (and snakes, which I can’t bear!).

END_OF_DOCUMENT_TOKEN_TO_BE_REPLACED

When I got to the 20th strip of the comic, I decided it was time to step back and review things. In this article on the artwork, I’m looking at the Faces & Characterisation.

Something that I haven’t sufficiently appreciated is how much people enjoy a well drawn facial expression. Which is strange, considering how much I also do, and how much I enjoy drawing them! Here’s a very old one ^ of mine which nearly everyone says is one of their favorites:

Above: ‘Bliss’ – 1991: People who see my work usually mention this as a favourite. I did this with a mirror, when I was around 23. Read More ^ END_OF_DOCUMENT_TOKEN_TO_BE_REPLACED

* NOTE: This used to be in the Comic section but it’s not really a story or gag strip, so I’ve moved it into the blog to take it out of the comic continuity (getting big ideas about the comic now…)

Heroes 1 – 3. I won’t lie to you, I’ve put very little thought into their personalities and back-stories. You see, I’m trying not to delay things or get over-ambitious like I did with my other now-cancelled webcomic. I want to just get stuck-in. The characters will be a mosaic of various friends that I had, blended with whatever interesting ideas pop into my head as I go along. Who knows? maybe you, the readers will make suggestions based on your own childhood pals, and they’ll go into the mix too? END_OF_DOCUMENT_TOKEN_TO_BE_REPLACED

This is the illustration that made my mind up that I had to do this comic. It was terrific fun to do and it really cast my mind right back into childhood.

END_OF_DOCUMENT_TOKEN_TO_BE_REPLACED

The quick ones are the best

I must view this quick sketch daily: it’s simple, cartoony, funny and lively

I must view this quick sketch daily: it’s simple, cartoony, funny and lively

END_OF_DOCUMENT_TOKEN_TO_BE_REPLACED

The week before last I went back over pages 2 and 3 to make him more consistent [he’s like Lon Chaney Sr., The Man of a Thousand Faces!]. I thought I’d managed it – well enough. But I haven’t. I posted a bit on the Facebook page ^ yesterday, and I’ll expand a little on it here.

I’ve also realised the problem of using a simple cartoon style and then trying to do close-ups. Surely the face should become more detailed in close-up. Otherwise, you end up with a few abstract looking lines?

Above: Clive, has been drawn anew each time in closer/larger aspect. See how he changes?
Next, I crudely increased his size from the small, quickly scribbled version using Photoshop. Pretty abstract little bunch of lines – but he still looks like the same guy.

Same design, but with a bit more detail.

Above, having learnt my lesson [finally] I drew over the blown-up version on the right, adding just a bit more detail. He looks more like the same person. The lesson is so obvious that I’m probably the only person on earth who didn’t realise it – to my cost. You have to work out the design of the character in the simplest possible forms – FIRST. Basic shapes and dimensions – and stick to that no matter what size he’s drawn at and regardless of detail.

It’s all in the preparation

That’s what decorators say. The problem really, is impatience and over-confidence. I have a small part of 2 days per week when I’m off work to do the comic and I just dashed into it. I’m going to have to loop-back over the previous pages – again, fix the faces and hopefully that’ll be the end of it. But I mustn’t do it until I’ve got Clive’s design nailed-down and codified into some sort of easy to use formula. I also need to work on drawing him from every conceivable angle. In animation studios they end up with what’s called a model sheet for each character. And as I mentioned in a previous post, they often even sculpt the characters in clay so you can examine them from every angle and make sure it works.